Today we are releasing a major set of improvements to Windows Azure.  Below is a short-summary of just a few of them:

Today’s release comes with a new Windows Azure portal that will enable you to manage all features and services offered on Windows Azure in a seamless, integrated way.  It is very fast and fluid, supports filtering and sorting (making it much easier to use for large deployments), works on all browsers, and offers a lot of great new features – including built-in VM, Web site, Storage, and Cloud Service monitoring support.

The new portal is built on top of a REST-based management API within Windows Azure – and everything you can do through the portal can also be programmed directly against this Web API.

We are also today releasing command-line tools (which like the portal call the REST Management APIs) to make it even easier to script and automate your administration tasks.  We are offering both a Powershell (for Windows) and Bash (for Mac and Linux) set of tools to download.  Like our SDKs, the code for these tools is hosted on GitHub under an Apache 2 license.

Windows Azure now supports the ability to deploy and run durable VMs in the cloud.  You can easily create these VMs using a new Image Gallery built-into the new Windows Azure Portal, or alternatively upload and run your own custom-built VHD images.

Virtual Machines are durable (meaning anything you install within them persists across reboots) and you can use any OS with them.  Our built-in image gallery includes both Windows Server images (including the new Windows Server 2012 RC) as well as Linux images (including Ubuntu, CentOS, and SUSE distributions).  Once you create a VM instance you can easily Terminal Server or SSH into it in order to configure and customize the VM however you want (and optionally capture your own image snapshot of it to use when creating new VM instances).  This provides you with the flexibility to run pretty much any workload within Windows Azure.

The new Windows Azure Portal provides a rich set of management features for Virtual Machines – including the ability to monitor and track resource utilization within them.

Our new Virtual Machine support also enables the ability to easily attach multiple data-disks to VMs (which you can then mount and format as drives).  You can optionally enable geo-replication support on these – which will cause Windows Azure to continuously replicate your storage to a secondary data-center at least 400 miles away from your primary data-center as a backup.

We use the same VHD format that is supported with Windows virtualization today (and which we’ve released as an open spec), which enables you to easily migrate existing workloads you might already have virtualized into Windows Azure.  We also make it easy to download VHDs from Windows Azure, which also provides the flexibility to easily migrate cloud-based VM workloads to an on-premise environment.  All you need to do is download the VHD file and boot it up locally, no import/export steps required.

Windows Azure now supports the ability to quickly and easily deploy ASP.NET, Node.js and PHP web-sites to a highly scalable cloud environment that allows you to start small (and for free) and then scale up as your traffic grows.  You can create a new web site in Azure and have it ready to deploy to in under 10 seconds:

The new Windows Azure Portal provides built-in administration support for Web sites – including the ability to monitor and track resource utilization in real-time: 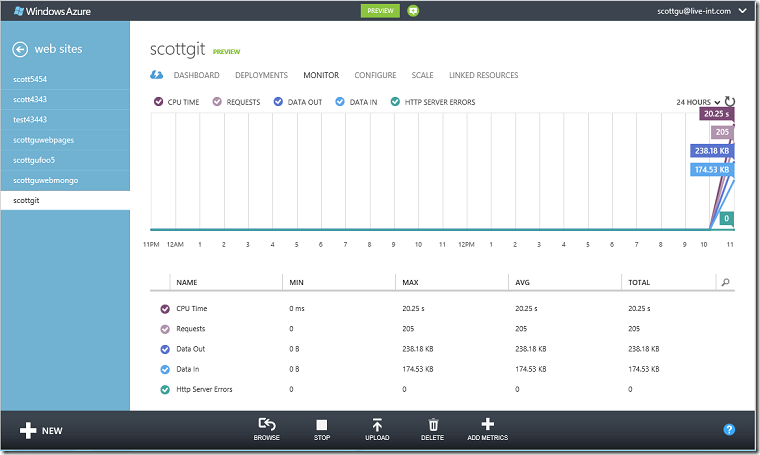 You can deploy to web-sites in seconds using FTP, Git, TFS and Web Deploy.  We are also releasing tooling updates today for both Visual Studio and Web Matrix that enable developers to seamlessly deploy ASP.NET applications to this new offering.  The VS and Web Matrix publishing support includes the ability to deploy SQL databases as part of web site deployment – as well as the ability to incrementally update database schema with a later deployment.

You can integrate web application publishing with source control by selecting the “Set up TFS publishing” or “Set up Git publishing” links on a web-site’s dashboard: 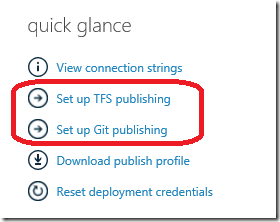 Doing do will enable integration with our new TFS online service (which enables a full TFS workflow – including elastic build and testing support), or create a Git repository that you can reference as a remote and push deployments to.  Once you push a deployment using TFS or Git, the deployments tab will keep track of the deployments you make, and enable you to select an older (or newer) deployment and quickly redeploy your site to that snapshot of the code.  This provides a very powerful DevOps workflow experience.

Windows Azure now allows you to deploy up to 10 web-sites into a free, shared/multi-tenant hosting environment (where a site you deploy will be one of multiple sites running on a shared set of server resources).  This provides an easy way to get started on projects at no cost.

You can then optionally upgrade your sites to run in a “reserved mode” that isolates them so that you are the only customer within a virtual machine:

And you can elastically scale the amount of resources your sites use – allowing you to increase your reserved instance capacity as your traffic scales: 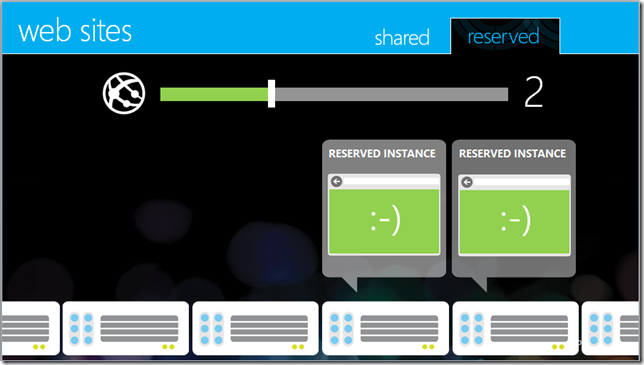 Windows Azure automatically handles load balancing traffic across VM instances, and you get the same, super fast, deployment options (FTP, Git, TFS and Web Deploy) regardless of how many reserved instances you use.

With Windows Azure you pay for compute capacity on a per-hour basis – which allows you to scale up and down your resources to match only what you need.

This cache can dynamically grow and shrink elastically (without you have to redeploy your app or make code changes), and supports the full richness of the AppFabric Cache Server API (including regions, high availability, notifications, local cache and more).  In addition to supporting the AppFabric Cache Server API, it also now supports the Memcached protocol – allowing you to point code written against Memcached at it (no code changes required).

The new distributed cache can be setup to run in one of two ways:

1) Using a co-located approach.  In this option you allocate a percentage of memory in your existing web and worker roles to be used by the cache, and then the cache joins the memory into one large distributed cache.  Any data put into the cache by one role instance can be accessed by other role instances in your application – regardless of whether the cached data is stored on it or another role.  The big benefit with the “co-located” option is that it is free (you don’t have to pay anything to enable it) and it allows you to use what might have been otherwise unused memory within your application VMs.

2) Alternatively, you can add “cache worker roles” to your cloud service that are used solely for caching.  These will also be joined into one large distributed cache ring that other roles within your application can access.  You can use these roles to cache 10s or 100s of GBs of data in-memory very effectively – and the cache can be elastically increased or decreased at runtime within your application:

We have updated all of the Windows Azure SDKs with today’s release to include new features and capabilities.  Our SDKs are now available for multiple languages, and all of the source in them is published under an Apache 2 license and and maintained in GitHub repositories.

The .NET SDK for Azure has in particular seen a bunch of great improvements with today’s release, and now includes tooling support for both VS 2010 and the VS 2012 RC.

We are also now shipping Windows, Mac and Linux SDK downloads for languages that are offered on all of these systems – allowing developers to develop Windows Azure applications using any development operating system.

The above is just a short list of some of the improvements that are shipping in either preview or final form today – there is a LOT more in today’s release.  These include new Virtual Private Networking capabilities, new Service Bus runtime and tooling support, the public preview of the new Azure Media Services, new Data Centers, significantly upgraded network and storage hardware, SQL Reporting Services, new Identity features, support within 40+ new countries and territories, and much, much more.

You can learn more about Windows Azure and sign-up to try it for free at http://windowsazure.com.

You can also watch a live keynote I’m giving at 1pm June 7th (later today) where I’ll walk through all of the new features.  We will be opening up the new features I discussed above for public usage a few hours after the keynote concludes.  We are really excited to see the great applications you build with them.